I am writing this article for anyone who owns a Samsung Galaxy S3, Samsung Galaxy S4 or even an S5 with battery problems. The Samsung Galaxy S4 Battery life is not something to brag about but the phone is. The S3 and S4 and S5 are great phones but only if that battery lasted a little longer. Don’t worry, there is good news. Unlike an iPhone, you can switch the batteries in your Samsung Galaxy phones with aftermarket ones. Let me re-phrase that, anything prior to Samsung galaxy S6,  you can replace the battery with an extended one. Samsung ended that with the release of the S6 phone.

Recently, I switched my default S3 battery with an extended battery and couldn’t be happier. I can use my phone throughout the day and never have to worry about charging. It used to be cumbersome to carry a Samsung Galaxy S3 charger with me everywhere. I spend more time charging my phone than actually using it. Believe me when I say, life can be much easier and enjoyable for all of you phone addicts. 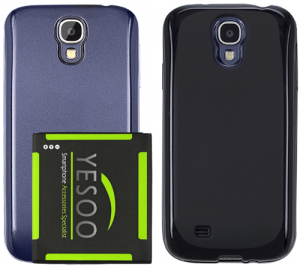 I decided to try my chances at the following battery as they had the best reviews out of all of the ones I have researched. Below is the best extended battery for your Samsung Galaxy S3 hands down. It packs a punch with 4300mAh of juice plus all the included goodies.


I have been using YESOO-GS3 for a few months now and I couldn’t be more happier with the usage time of my phone. This battery pretty much doubled the charge of the S3’s original battery. YESOO-GS3 package from amazon wasn’t expensive with a price tag of $20 with free shipping. It also included the extended battery rear plastic cover to match your phones color. YESOO was also kind enough to include an extended battery case for the phone itself so that I didn’t have to go hunt for one myself. I was skeptical at first as this package was too good to be true. After many months of continuous usage I can safely tell you to go and grab it from Amazon.


This another wonderful extended battery for your Samsung Galaxy S4 phones. This package comes with a larger capacity battery than the one I mentioned for the S3 above. You can the the phone back plastic plate in blue, black and other additional colors. This package also comes with the 5200mAh battery which will provide you with the juice to run all your applications throughout the day.

If you have the Samsung Galaxy S5 in hand  then you want to get the following battery. This one holds an even bigger capacity of 7500mAh.

The power of these extended batteries will come in handy when you are going on long trips or vacations. All of these packages also includes the high quality TPU extended battery case so you don’t have to look elsewhere. The cases included with these packages aren’t bad at all, they have the feel of a good quality case and gives your phone a much better grip as well.

These manufacturers have a very reputable feedback rating on Amazon. Upgrade your Samsung Galaxy S4 battery life or the S3 or even the S5 today and enjoy your smartphone the way it should be used.