Before we discuss the “No Cast Destination Found Error” within the Google Cast plugin, let me dig into the different types of Google Cast functions. Most people confuse the Google Cast (functionality) with the Google Chromecast (device), which are entirely two different things. Then there is the Google Cast for Education plugin, which adds to the confusion. My goal is to break each one down in this article, so all of this makes sense. 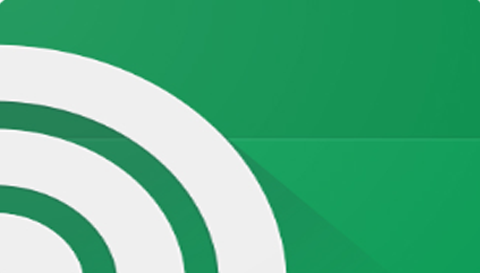 Google Cast function is built into the Chrome browser which can be accessed as follows or as Google calls it the “Hamburger” menu. 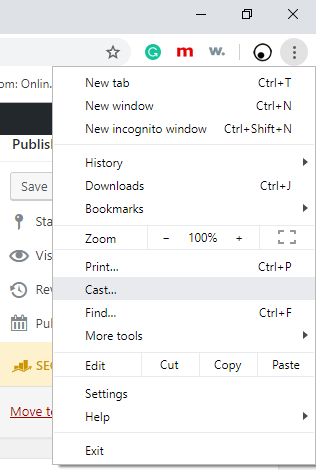 You can use the cast button to cast your tab, window, or even your whole desktop to another computer screen or television.

Here are the two different scenarios of usage:

If a TV or projector has the Google Chromecast device plugged into the HDMI port, you can cast your screen to that destination. For example, a student cast to a chromecast device attached to a projector or TV in the classroom.

Google Chromecast device requires all casting devices to be connected to the same Wi-Fi network. Google Cast for Education operates over the cloud so your devices can be located anywhere in the world.

Now that you understood the concept let’s move on to discussing each.

You can buy the Google Chromecast device directly from Google or from Amazon. Amazon may provide faster returns with prime etc.

Below is a video showing how to set up the Google Chromecast device.

How to Set up Google Chromecast 2019

Google Cast for Education requires no additional hardware to function, but it does require the Google Chrome Browser. Casting your screen has never been so easy with Google Cast. This article will mostly pertain to those of you working in the educational field where Google Cast for Education extension is usually deployed. Anyone can install the Google cast for EDU extension. However, Google limits the receiver to be set up for organizational accounts only. You will otherwise get the following error.

After you install the Google Cast for Education extension from the Chrome Web Store, follow these instructions to set up your receiver. Receivers are typically set up on teacher/presenter computers for the audience/students to cast to.

When you click on the Google Cast for Education extension, you will be presented with the following window, and here you can name your receiver, among many other options. 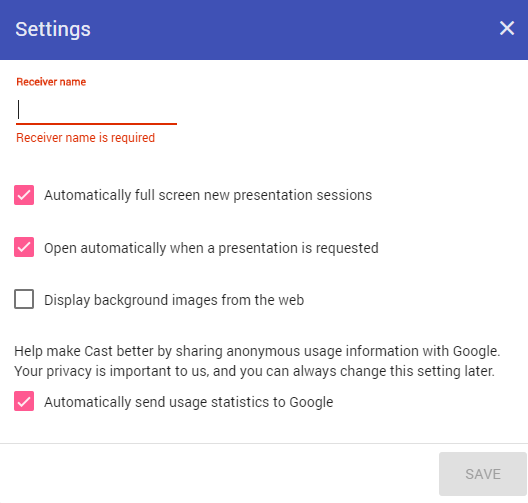 Once you save changes here, you will be able to invite other users to the Google Cast receiver that you’ve just set up. Teachers can also add entire classrooms to their invitation list. 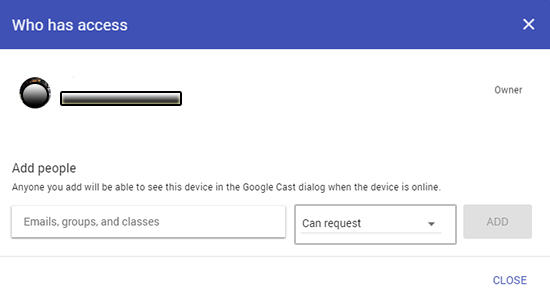 You can add specific users to cast to your receiver, or you can pre-add them to present automatically without asking. You may want to change this to a request only option if you wish your students to take turns showing their presentations. It can also be a security concern if you allow users to cast at all times automatically.

The “no cast destination found error,” usually happens while trying to find your Google Cast for Education software receiver on the network. You may not have the proper web RTC ports forwarded on the network. Your filter may also be blocking specific Google API’s from functioning properly. Here is Google’s guide on what to check for if you run into these issues.

If your network administrator has pre-selected webRTC ports, add them within the G Suite admin panel, as shown below. Most times, you can allow Google to pick the ports automatically. 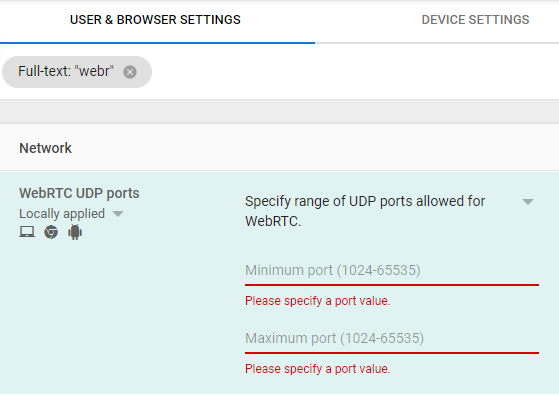 If you are still faced with the “No Cast Destination Found Error,” enable cloud services under the Google Cast Plugin as shown below, you should now be able to find your Google Cast for Education receiver on the network. 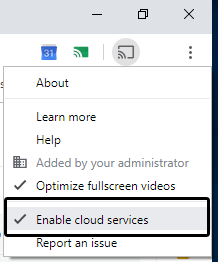 Your users will have to right-click and enable “Google Cloud Services” on the Google Cast plugin once only. The setting is then saved under that user account for future use.

I have not found a way to enable “Google Cloud services” by default from the G Suite Admin Panel. If anyone knows how to do this, please post below.

Here are some of the steps you can take if you are getting the “No Devices Found Error” while connecting to your Chromecast.

If this article was helpful to you, please let us know below. Also please consider joining our IT Community on FaceBook & help us grow. Thank you for visiting! 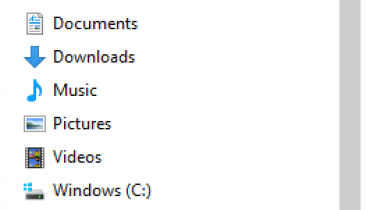