Intel has been dominating the computer chip market for many years, I am glad that now we have a top competitor in the same space. To the younger generation – AMD is not new to this market, I still have a Phenom chip of theirs running in my home server for over 5 years now. I have to say it is one of the most reliable computer builds I have done in my lifetime, still running without any hiccups. However, AMD never kept up with the speed of Intel offerings for a very long time. I am glad Advanced Micro Devices (AMD) is back and better after the deep sleep. This is excellent news for not only tech enthusiasts but for stock market investors as well. Buy AMD stock early and hold it for the the long term people. 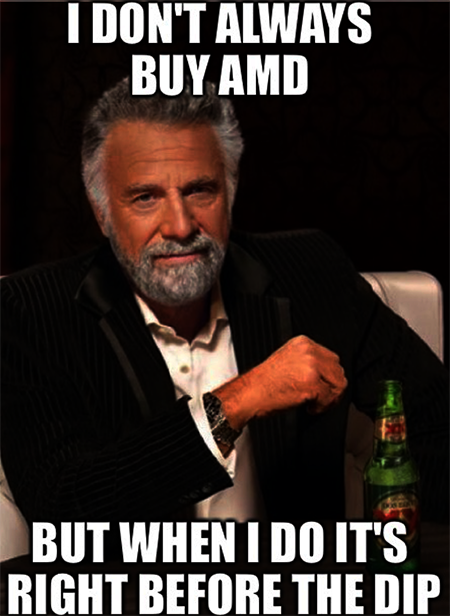 Why Should You Buy AMD Stock Now?

Not very long ago, AMD stock had died down to even $2 dollars per share but today with the introduction of new technology, it’s worth almost $14 dollars a share. I know some people today wish they had held AMD “long” at $2 dollars per share (holy moly that would have been a nice payout right about now) but AMD is just getting started people! During the date of this publication, you could pick up AMD shares for as low as $13.50-$14.00 per share. Lately the stock was included into the S&P index, this is a huge step up for AMD. Advanced Micro Devices stock can have a huge pop any day now, that is why I encourage you to buy AMD stock now before it is too late. Here are 2 reasons why you should buy AMD stock today for a bigger payout later.

Ryzen is shaking up the chipset market among enthusiasts, gamers to content creators. Ryzen is becoming the go to chip for all of your computing needs. I mean with a name like Ryzen, how could you go wrong? Ryzen offerings provide the same speeds of a an equivalent Intel processor for half the price!. AMD has priced Ryzen so well that even their lowest flagship the R5 1400 (3.2 – 3.4GHZ) at $169 gives you a better bang for your buck than Intel processors. I have no doubt in my mind that Ryzen will easily capture the larger market share Intel enjoys without breaking a sweat. As an investor, you want to see a great company making awesome products that sell! As you have probably heard, Ryzen chips were sold out very quickly by almost every online vendor. This is a great sign that people are finally making the move to upgrade their computers and they are picking Ryzen!

Napes is AMD’s new server line chip that is 2x times faster than of the rival Intel’s E5-2699 V4 chip. This means most cloud business providers will be flocking over to Advanced Micro Devices (AMD) very soon. It would be foolish not to! considering AMD Naples is a very power efficient chip. As an investor, we would like to see this because cloud business is where the money is. Amazon opting to use AMD as their server hardware provider equals a serious boost for AMD stocks. Same goes for Microsoft’s cloud business. Due to the ever increasing need for cloud computing, I expect a major boost in AMD’s stock prices in the near future.

3. Desktop Computers Are Not Obsolete!

Recently, I have watched a YouTube video where someone talks about the future of desktop computers in regards to AMD stocks. He was pretty much saying why AMD’s new chips won’t scale because the PC market is dead. His notion was that handheld devices like an iPad will take over most of the computing tasks of today.  I have to simply disagree with this person because we still rely on powerful desktop computers for work, gaming, 3D modeling etc. I don’t see an iPad rendering Overwatch or the Witcher 3. Even if it did someday, it just won’t be as enjoyable as playing on desktop computer in 1440p or 4k. There will always be a market for desktop computers and therefore the demand for a powerful processor like Ryzen only goes up. If big companies like Apple decides to include Ryzen processors into their future iMac line-up, AMD investors will get a major boost.

When it comes to AMD investing, the pre-market Buy is never a good move. I have been watching AMD stocks for sometime now and the stock tend to trade down late mornings and then pick back up around noon. Always watch for a dip later in the day, buy low sell high. In the case of AMD, I would buy low and hold long term. At the current price point, $13.50 is a very good entry $14 is an easy entry. Some of us have been lucky enough to even enter at $12.60 recently but I have a feeling AMD isn’t going to revisit those lows any time soon.

Another investment tip is to not panic when the market swings up and down. These market fluctuations tend to affect the whole market such as the recent interest rate hike. If you have money available to trade, use the market swings to your advantage and buy AMD stock at lower share prices. I cannot stress how important this is because I have seen so many people lose money due to panic selling. Remember that you only stand to lose or gain by trading your shares. Advanced Micro Devices (AMD) is a long term hold in my book till it breaks at least $30 a share. If you buy AMD stocks now, by that point you would have doubled your investment.

Not only am I an AMD stock investor, I am an AMD fanboy as well. With the release of Ryzen, I am thrilled to put together my long awaited gaming computer build. Here are the components I will be using for this new build. You may use the affiliate links below to add these products directly to your Amazon cart.

Disclosure: At the time of this article, the author held a small position in AMD. This article is for informational purposes only, stock investments can be risky. If you decide to buy AMD stock, only invest capital that you are comfortable risking.

IT World
IT World