Are you looking to buy the best budget desktop computer? You may be going about it all wrong. I say that because, you can buy a refurbished computer instead of a new one for way less. I have been a “techie” for many years and I’ve seen people throw away their hard earned money on new computers every few years. And often these brand new budget computers that they order comes with nothing more than a core i3. They usually run very slow and comes with inadequate amount of memory (RAM). I find that you can get a refurbished machine for less than $100 these days.

So, why is the best budget desktop computer a “refurbished” or “used”one?

I was recently in your shoes, researching computer parts for the best budget desktop computer that I could build. I then realized it was going to cost me way too much in new parts. I also didn’t like the idea of getting new budget machines which didn’t look so appetizing – performance wise. I then spent some time researching the best refurbished computer that I could find online. That’s when I came across the HP DC7900 model on Amazon.

Finding this model, enabled me to drop all of my current plans for a new budget computer build. I simply picked up the refurbished model on Amazon and customized it with my own parts. For all the non technical people out there; don’t worry, you won’t need to customize it if you don’t need any additional performance out of it – they come ready to be used out of the box. Out of the box the HP DC7900 has the power to handle all your normal office applications and even your average video and photo editing jobs.
The HP DC7900 – running Intel Core 2 Duo at 3.0 GHZ and 4 Gigabytes of memory. At a price tag in the $70 to $100 range, this computer was a steal. In the year 2016, I still use the DC7900 as my main desktop machine. Read on to see pictures of my refurbished desktop as well as to get some detailed information before you purchase.

If you are considering buying this computer, here is the direct link to it on Amazon. Be sure to ignore the price on the below advertisement (It won’t cost you $1140 I promise!)

For me, choosing a refurbished computer was cost efficient and a smart decision VS the budget PC build or even a brand new budget computer. The refurbished HP DC7900 came with Windows 7 Professional SP1 CD for both 32 Bit and 64 Bit versions. If I had a budget PC build, I would have to go out and buy a new Windows Operating System. Although Amazon initially said this desktop would only come with 2 gigabytes of ram, to my surprise it had 4 gigabytes of ram on arrival. A budget PC build would cost me additional money on DVD drives, Memory modules and others.

The refurbished HP DC7900 came with everything I needed for a work computer. I wasn’t looking for a gaming PC but if you upgrade the power supply and the video card you can achieve that with this PC as well. Don’t expect it to play high end games but it will handle your average Counter Strike Source with ease. I found that if you get a lower end graphics card, you won’t even have to upgrade the power supply. The only things you would need to purchase would be a monitor, keyboard & mouse combo. Both of these can be found below for cheap.

I haven’t done too many performance upgrades to this machine other than swapping the hard drive for an SSD & upgrading the video card. You can always sell the hard drive it came with on eBay and get some money back. I upgraded my video card to a EVGA GeForce GT 610.

If you are new to the components inside of a computer and would like to know how to upgrade a video card, please see the video below.

The SSD upgrade brought about awesome performance and boot up times in my machine. The Intel X25-M is a solid SSD, I haven’t had a single issue since I’ve installed it in the DC7900. You can also upgrade to a larger Crucial MX300 which is also a very good Solid State Drive (SSD). Both of these drives are very speedy, you can expect applications to launch quickly and file transfers to speed up.

If you are new to the components inside of a computer and would like to know how to replace your traditional (SATA) hard drive with a Solid State Drive, please see the video below for instructions.

The DC7900 is a very fast computer and runs very quiet. I use it to run Ubuntu along with virtualization software such as VirtualBox. The hardware and processor itself supports virtualized environments so everything ran smoothly on the HP DC7900. 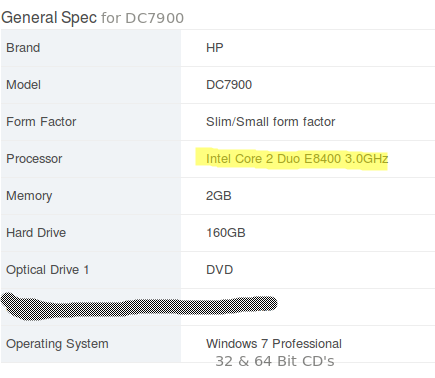 A budget PC build‚ in my view isn’t really worth it. It will end up costing you a lot of money and time in the end and it probably will not run your high end games anyway. Intel processors themselves will cost you a lot if bought separately. You will have to go out and buy your own Windows Operating Systems. Windows 7 will come pre-installed on the HP DC7900 computer thus saving you time if you are deploying a lot of these. Unlike the budget PC build‚ you don’t have to go hunt for hardware drivers separately‚ a Windows Update Will find all the drivers required for this computer. 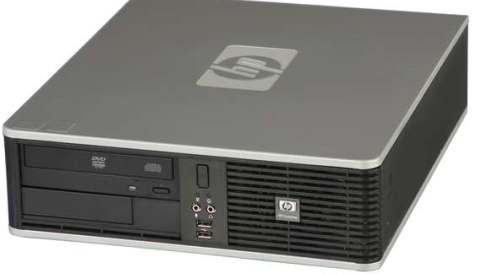 My refurbished DC7900 came looking brand new‚ everything was clean inside and out. I really loved the fact it is a mini form factor and sits snugly behind my monitor. Opening it up for upgrading parts is very easy‚ there are quick release tabs on each component as well as the case itself. If you are interested in purchasing this computer‚ you can head over to Amazon. You may see similar models on their website but look out for the 3.0 GHZ Intel Core 2 Duo. Sometimes‚ it ships for free saving you another $15 in shipping costs. I assure you that the HP DC7900 is a stable product fro my experience. The HP DC7900 refurbished computer will come with a 90 day warranty (depending on the Amazon seller that you choose to purchase from). This is indeed still one of the best tech purchases I have made till date.